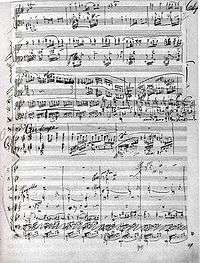 The Concerto for Piano and Orchestra in G minor, Op. 33, was the first of three concertos that Antonín Dvořák completed—it was followed by a violin concerto and then a cello concerto—and the piano concerto is probably the least known and least performed.

As the eminent music critic Harold C. Schonberg put it, Dvořák wrote "an attractive Piano Concerto in G minor with a rather ineffective piano part, a beautiful Violin Concerto in A minor, and a supreme Cello Concerto in B minor".

Dvořák composed his piano concerto from late August through 14 September 1876. Its autograph version contains many corrections, erasures, cuts and additions, the bulk of which were made in the piano part. The work was premiered in Prague on 24 March 1878, with the orchestra of the Prague Provisional Theatre conducted by Adolf Čech with the pianist Karel Slavkovsky.

While working on the concerto, Dvořák himself realized that he had not created a virtuosic piece in which the piano does battle with the orchestra. Dvořák wrote: "I see I am unable to write a Concerto for a virtuoso; I must think of other things." What Dvořák composed instead was a symphonic concerto in which the piano plays a leading part in the orchestra, rather than opposed to it.

Maurice Ravel's Piano Concerto in G major was composed between 1929 and 1931. The concerto is in three movements and is heavily influenced by jazz, which Ravel had encountered on a concert tour of the United States in 1928.

The concerto was deeply infused with jazz idioms and harmonies, which, at the time, were highly popular in Paris as well as the United States, where Ravel was traveling on a piano tour. Ravel remarked that "The most captivating part of jazz is its rich and diverting rhythm. ...Jazz is a very rich and vital source of inspiration for modern composers and I am astonished that so few Americans are influenced by it." After his well-received tour, Ravel wanted to give the first public performance of this new work himself. However, health issues precluded this possibility, with his preparatory practice of Liszt's and Chopin's etudes leading to fatigue. He then planned a premiere for March 9, 1931, in Amsterdam, but these plans also were canceled due to his work on the Concerto for the Left Hand, his many public appearances, and his performances of his other works.

The Concerto for Piano and Wind Instruments was written by Igor Stravinsky in Paris in 1923–24. This work was revised in 1950.

It was composed four years after the Symphonies of Wind Instruments, which he wrote upon his arrival in Paris after his stay in Switzerland. These two compositions are from Stravinsky's neoclassical period, and represent a departure from the composer's previous Russian style of The Rite of Spring.

This concerto numbers among many works for piano written about the same time to be played by the composer himself. This is also true of Capriccio for Piano and Orchestra (1929), his Sonata of 1924 and his Serenade in A (1925). He kept the performance rights to himself for a number of years, wanting the engagements for playing this work for himself, as well as urgently desiring to keep "incompetent or Romantic hands" from "interpreting" the piece before undiscriminating audiences.

The orchestra is scored for two flutes, piccolo, two oboes, cor anglais, two clarinets, two bassoons (second bassoon doubling contrabassoon), four horns, four trumpets, three trombones and tuba and accompanied by timpani, cymbals. Although combining winds and piano was unusual at the time, the form had been explored earlier in the twentieth century and would be explored later.

The Piano Concerto No. 23 in A major (K. 488) is a musical composition for piano and orchestra written by Wolfgang Amadeus Mozart. It was finished, according to Mozart's own catalogue, on March 2, 1786, around the time of the premiere of his opera, The Marriage of Figaro. It was one of three subscription concerts given that spring and was probably played by Mozart himself at one of these. The concerto is scored for piano solo and an orchestra consisting of one flute, two clarinets, two bassoons, two horns and strings. In Mozart's later works the wind instruments are equal to the stringed instruments, and this is also the case in this concerto.

The concerto has three movements and lasts about 26 minutes:

The first movement is in A major and is in sonata form. The piece begins with a double exposition, the first played by the orchestra, and the second when the piano joins in. The first exposition is static from a tonal point of view and is quite concise, the third theme is not yet revealed. The second exposition includes the soloist and is modulatory. It also includes the previously unheard third theme. The second exposition is ornamented as opposed to the first exposition which is not. The second theme has harmonic tension. This is expressed by dissonances that are played on the beat, and then solved by an interval of a descending second. This is also expressed in the use of chromatics in the melody and bass lines which is a source of harmonic tension, as the listeners anticipate the arrival of the tonic.